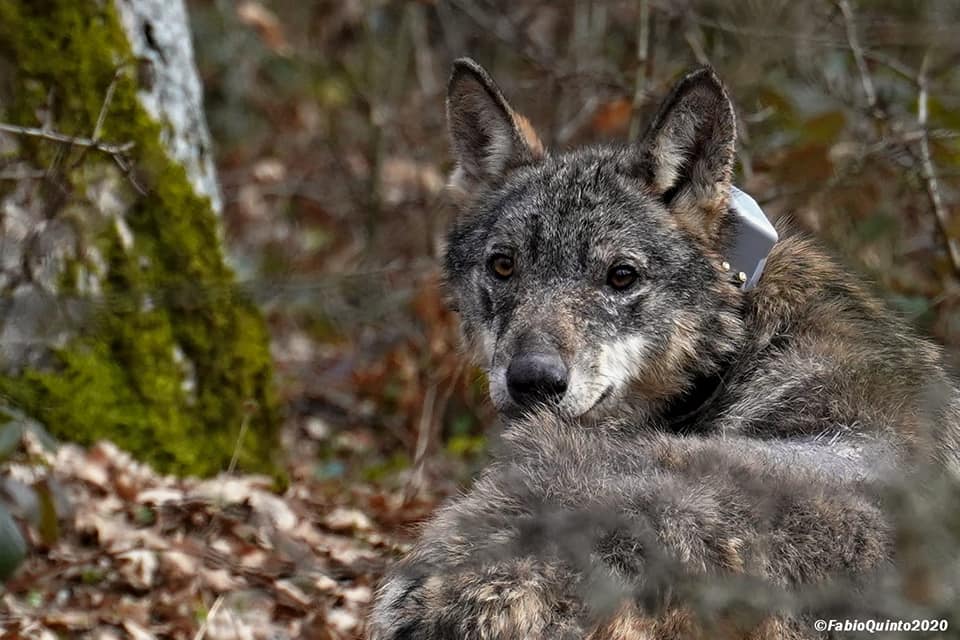 That of wolves accustomed to human presence is a new problem in our country, whose cases can now be counted on the fingers of one hand, but this does not mean that it should be underestimated.
It poses a huge threat to the conservation of the wolf, and it is easy to imagine that these cases will be more and more frequent in the future.
As always, man has enormous responsibility for these behaviors, as it is often himself who influences wild animals through wrong actions and attitudes.

We said it to exhaustion: no food is given to wild animals, especially to large carnivores that if fed, directly or indirectly, can get used to the human presence, ceasing to be afraid of it and becoming potentially dangerous.
A famous American saying goes "a fed bear is a dead bear"(a bear given food is a dead bear).
The same goes for the wolf and for all the other wild animals, with the huge difference that in our country a fed animal whose behavior is totally different from its nature often becomes "a myth”For public opinion, while in the United States one does not go for the subtle and a confident animal comes first killed and subsequently the responsibility for this terrible gesture is transferred to the community, guilty of having created yet another confidant animal that has died due to the wrong behavior of man: we are sorry to say, but we prefer it to be so, it's brutal, but it serves to educate people who somehow end up feeling responsible that a wild animal does not become "accustomed" to man.

In this cultural context there are many stories that could be cited, some very complex, such as the case of the she-wolf of Potenza.

For those who did not grant it, it is a female she-wolf who used to move undisturbed around the city of Potenza, in search of food, little or nothing fearful of the human presence, sighted repeatedly for some time.
The cause of this anomalous behavior is conceivable in having directly or indirectly received food from humans.
Due to this anomalous behavior, the she-wolf was recently captured and released twice, the second after having even mated with a domestic dog and after continuing, as it emerges, to frequent the urban context.
This story has sparked many doubts and many questions have surfaced.

Do we really need to have an admittedly confident she-wolf that moves in an urban context?
But really the desire to remove such an animal from the territory clashes with a public opinion that in Italy sees a wolf with the same empathy as its own puppy and does not understand instead the wild nature of this species and the responsibilities that it requires. ?

These are complex questions that need answers on several levels, but it is also true that this unbridled protectionism offers its side to those who criticize the management of the wolf in our country, which appears, in critical cases, always and in any case on the side of the wolf without if and without but.

Let me be clear, the writer is "on the side of the wolf"Without a doubt, our whole association is, but it is also undeniable that episodes like this, in which a confident animal is still around because there is no will to place it elsewhere or, let's face it clearly, killing itends up making my heart falter too.
Also, this kind of management, in our opinion, it is reflected on the whole wolf population in Italy, which ends up appearing in the eyes of its detractors or simple ignorant on the subject as a herd of hybrid animals and confidants who roam the countries to eat the kibble of cats.

The same goes for the poor bear M49 of which many have now forgotten but which is in our thoughts and discussions on a daily basis: as you read, the bear is still locked inside a concrete box of a few square metersor, forced into it both by the lack of long-distance management choices at multiple levels, and by a media uproar that has ended up harming only the bear.
Many people, including myself, think that they would prefer a dead bear to a magnificent animal of this kind locked for life in a concrete box. perhaps more with dignity, among its green Alpine woods: a bitter end, but a more akin to his spirit.

This is why the matter is complex, and certainly not easy to administer: making decisions is difficult, but creating culture on these issues is much more so, and we too have mixed feelings with the certainty, however, that all controversies must be avoided.

In this context, moreover, things can get even more complicated and we must make the appropriate distinctions: you have seen this video of the wolf howling among the houses in L'Aquila released a few days ago?
A magnificent specimen, in the early hours of the day, howls vigorously while a cell phone films it a stone's throw from the houses.
Well, these images will be more and more frequent in the future, but it must also be said that these are the absolute normality in a country where the wolf takes up more and more space and where man is almost everywhere: exactly like confident wolves, unfortunately there will be more and more because there will always be someone out there ready to give them food.

For the future it will become more and more a priority have the tools to understand the difference between "normal" and "confident" attitudes and to be able to act not only on the causes but also on any problematic individuals in an effective and timely manner.
Politics must have faith in the indications given by researchers and the courage to transform them into regulations, having the courage to step aside.

In conclusion, this provocative post wants to try to stir the spirits, because we do not agree on the release of the she-wolf of Potenza and more generally we want to think in a perspective in which populations must be favored more than a single individual.
We realize that for many it is an absurd speech, but for many it is the absolute normality when you have a certain preparation on naturalistic themes.
Sometimes painful choices can make us responsible, as long as we choose to act, and to make them we need to change our way of thinking about these magnificent wild animals with which we are lucky enough to share woods, forests and plains.